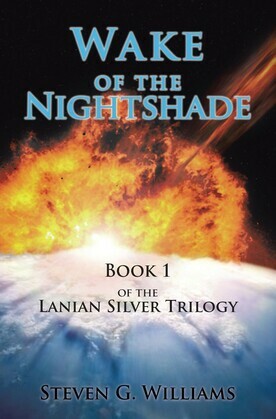 Wake of the Nightshade

Join Agent Lanian Silver on the trail of a doomed vigilante who is challenging one of the most dreaded crime syndicates in the Galaxy. Known simply as the Organization, they have created the giant ship Nightshade to dominate all smuggling routes in the Planetary States. Agent Silver must use all the resources of the Interplanetary Police Force Corporation to follow the trail of carnage wrought by the vigilante and her partner: the newly sentient mind of the medical ship Crisis Averted.

In the wake of the giant ship lay discoveries that will shatter the foundations of the Planetary States and propel Agent Silver into a climactic battle on a lonely planet in which the very security of the Galaxy hangs in the balance.

But the journey is just beginning