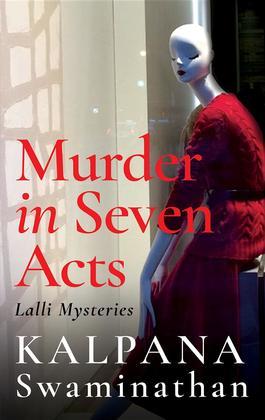 The curiosity of murder unfolds in seven acts.

Since Kalpana Swaminathan’s first whodunit was published over ten years ago, Lalli—sixty and silver-haired and tough as nails—has been one of the most memorable detectives in Indian fiction. Lalli returns in this brilliant page-turner, a collection of seven stories, to solve some of the strangest, most complex cases of her career.

The opening act, in which a face keeps reappearing until a crime committed long ago is revealed, is followed by a murder that could be hypothetical—or a reality (Lalli turns to Schrodinger’s Cat to find out). In the third act in this unfolding drama, Lalli and Sita are invited to a book-burning which turns out to be murder most foul. And Lalli turns her skills to the world of high fashion when Sita sits next to a serial killer on a bus—but was he killer or victim?

The aptly named Sucide Point in Bombay’s suburbs, leads Lalli to a suicide that turns out to be something far more sinister. And an innocuous desk ornament is the clue to a crime most artistically executed. Finally, for connoisseurs of fiction, the curtains come down with a threnody for lost love.