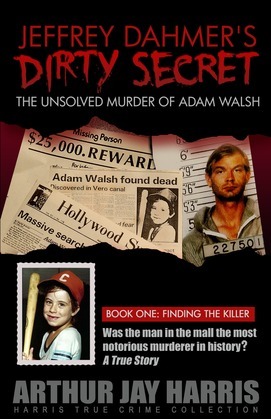 The Unsolved "Murder" of Adam Walsh - Book One

NEW! The latest on the Adam Walsh story, longform journalism on UPROXX:

"WHAT REALLY HAPPENED TO ADAM WALSH?"

On July 27, 1981, six-year-old Adam Walsh vanished from a Hollywood, Florida shopping mall. His mother, Reve Walsh, left him unattended for several minutes, and when she returned, he was gone. Two weeks later,Adam's severed head was found in a canal, and to this day, the rest of his body has never been recovered. John Walsh, Adam's father, went on to champion unsolved crimes in his America's Most Wanted television program, using his son's loss as the impetus for his campaign. In 2008, Ottis Toole, a serial killer who died in 1996, was recognized as the man behind the grisly murder.

This is the story we know well, but, everything may not be what it seems. True-crime author Arthur Jay Harris has been following the Adam Walsh case almost since its inception, and he first challenged police's official statements when he posited that Jeffrey Dahmer, and not Toole, was the likely culprit for the crime. Harris' evidence included seven witnesses that saw Dahmer at the mall around the time of the disappearance, along with a police report that stated that the infamous killer was living and working a mere 20 minutes away from the Hollywood mall where Adam was abducted from.

Indeed, if you follow Harris' work with ABC and The Miami Herald, you too may come to the conclusion that police fingered the wrong man. But, that's not where Harris' story and investigation ends. As Harris posits in The Unsolved Murder of Adam Walsh, which has turned into a two-book series, Adam Walsh may not have been murdered after all.

What was your conclusion after years of research into the Adam Walsh murder?

After shaking out what police and the medical examiners, and yes, the Walsh family, and the news media have put out about this case, there is only one takeaway that remains true: Adam Walsh disappeared. Everything else you think you know about this case is either absolutely untrue or is so unlikely that it's essentially untrue.

In short, the evidence against Ottis Toole, who police blamed for Adam's murder, is between poor and none. Another police suspect, who they dismissed with little inquiry -- no less than Jeffrey Dahmer, who at the time was documented living no more than 20 minutes by vehicle from the mall, is a far more likely suspect. Dahmer: 11 severed heads. Adam: severed head. That and seven police witnesses who said they saw Dahmer at the mall at the time with or near Adam, plus Dahmer's access to the same type and color of van reported by mall witnesses as the getaway vehicle, and a comparison including Dahmer's mugshot to a police composite drawing from a stunningly similar attempted kidnapping of a child at a nearby location of the same chain store exactly two weeks earlier.

But I made most of that case years ago, and my evidence was widely reported. What's new in the case, and no less outrageous, is this: The dead child they said was Adam is overwhelmingly likely not him. And the only reason we could possibly know this is because when police closed the case investigation in 2008, 27 years after the murder, all the official agency case files finally became available, for the asking. Conclusive certainties in homicide cases are startlingly few and I don't leap to them. But this is certain: In the now nearly 35 years since the homicide, there never could have been a trial, and never will be a trial, against any defendant for the murder of Adam Walsh. That's not for lack of suspects; it's because the identification of the found child as Adam can never be proven in court...