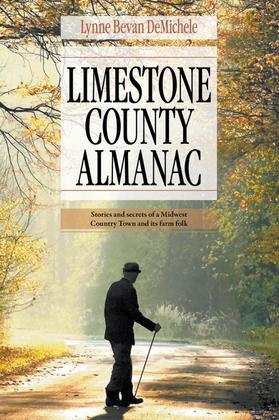 by Lynne Bevan DeMichele (Author)
Buy for $9.99 Excerpt
Fiction Historical
warning_amber
One or more licenses for this book have been acquired by your organisation details

The bible of prairie life was once the almanac. Limestone County Almanac is a beautifully honed collection of loosely related stories about the people of Mount Nebo, a farm town in southern Illinois. The four parts of the book correspond to the seasons that governed country life - planting, growing, harvesting, and hunkering down for winter. The vivid, sometimes somber, often hilarious personal stories you'll encounter span the years of the Great Depression, World War II, and the post-war recovery, as lived in the sprawling prairie countryside. Through the eyes of the mysterious rural postman, Denton Kamermeyerer, you will come to know a marvelous assembly of characters whose lives intertwine with secrets, joys, and the occasionally tragic costs of everyday life. The opening scene is an early foggy morning at the town's old cemetery, where a lone figure contemplates a fresh grave - that of postman Kamermeyerer, surrounded by the headstones of the people whose lives he observed in his daily rounds. After WWI, fleeing the "still fresh blood of memory," the postman comes to know the simple-living, singular people of Limestone County. And ultimately, he finds his own peace among them. As he drives his daily route he jots down observations in his little notebooks - things he witnessed that "not even Faulkner could have imagined!"