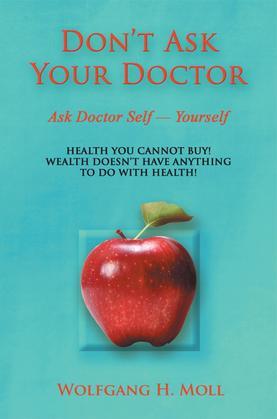 by Wolfgang H. Moll (Author)
Buy for $9.99 Excerpt
Nonfiction Health & fitness
warning_amber
One or more licenses for this book have been acquired by your organisation details

Don't Ask Your Doctor is a revolutionary and controversial book, written to wake up the American people about the tremendous downturn in general health over the last 25 years. Wolfgang H. Moll is not a physician and has no medical training; but he approaches health from the patient's point of view. He criticizes the American addiction to unnecessary doctor and hospital visits, and is also critical of the extreme influence of drug manufacturers pushing prescription drugs. He made it to age 75 without doctors, prescription drugs or other medicines, without hospital visits or bypass surgeries, and without a wheelchair, chemotherapy or radiation tests. Shortly after the author had a heart attack at age 27, he began investigating profoundly the subject of health. He established his personal well-being as his priority in life, and told the whole world, "I did it my way!" This book is enlightening because: The USA has the highest rate of extreme obesity in the world - about one third of the population. The USA has the highest rate of diabetes in the world. The USA spends $2.3 trillion per year on health care, by far the highest budget on earth. The USA has more heart surgeries than any other country. The USA has less than 5 percent of the world's population, but consumes half of all prescription drugs.