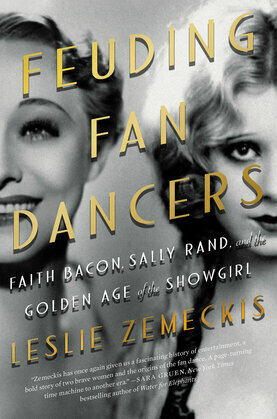 The Feud of the Fan Dancers

Celebrated burlesque historian and actress Leslie Zemeckis continues to discover the forgotten feminist histories of the Golden Age of entertainment, turning her sights on the lifelong feud between Sally Rand and Faith Bacon—who each claimed to be the inventor of the fan dance.

Some women capture our attention like no other. Faith Bacon and Sally Rand were beautiful blondes from humble backgrounds who shot to fame behind a pair of oversized ostrich fans, but with very different outcomes. Sally Rand would go on to perform for the forty million that attended the 1933 World's Fair in Chicago and rise to great fame. Faith Bacon, the Marilyn Monroe of her time––once anointed the World's Most Beautiful Woman––would fall into drug use and ultimately leap to her death from the window of a residence hotel.

In an era before women's rights, Bacon and Rand fought their way through the showgirl scenes of New York, Hollywood, and the world with grit and perseverance, resisting established tropes and redefining beauty. They played peek-a-boo with their lives, allowing their audience to see and know only slivers of themselves. A hint of a breast? A forbidden love affair? In the 1930s they were both towering figures, goddesses, icons of showgirls. Little is known about who they were and where they came from, until now.

The Feud of the Fan Dancers is the never-before-told story of two notorious women during a tumultuous time in entertainment history. With the help of both their surviving relatives, Leslie Zemeckis has pieced together their story—nearly 100 years later. They were independent, strong-willed women who let nothing––with the exception of one little feud––stop them on their way to the top.