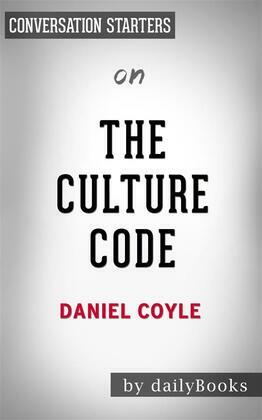 The Culture Code is the latest book release from author Daniel Coyle. In The Culture Code, Coyle explores where culture originates, how culture can be built, how to sustain a current culture within a group, and how to strengthen a culture that is in need of being fixed. To write The Culture Code, Daniel Coyle goes to visit and interview several of the most successful groups in the world. Some of these groups are the U.S. Navy's SEAL Team Six, Pixar, the Upright Citizens Brigade, IDEO, Zappos, and the San Antonio Spurs. Coyle identifies three key skills that are needed in order to cultivate a culture. After that, he explains to readers how they can create their own successful culture. Daniel Coyle concludes that culture is not something that people are. Rather, culture is something that people do.

In his review of The Culture Code, Charles Duhigg called the book the essential guide for understanding how groups that are successful work. Adam Grant, the auther of Option B, says that The Culture Code “blows” other books written on culture “out of the water.”