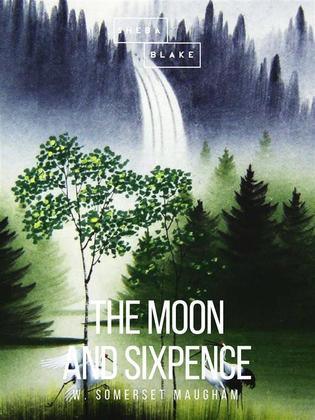 The Moon and Sixpence is a novel by W. Somerset Maugham.

It is told in episodic form by a first-person narrator, in a series of glimpses into the mind and soul of the central character Charles Strickland, a middle-aged English stockbroker, who abandons his wife and children abruptly to pursue his desire to become an artist. The story is in part based on the life of the painter Paul Gauguin.

The novel is written largely from the point of view of the narrator, a young, aspiring writer and playwright in London. Certain chapters entirely comprise accounts of events by other characters, which the narrator recalls from memory (selectively editing or elaborating on certain aspects of dialogue, particularly Strickland's, as Strickland is said by the narrator to have a very poor ability to express himself in words).

The narrator first develops an acquaintance with Strickland's wife at literary parties, and later meets Strickland himself, who appears to be an unremarkable businessman with no interest in his wife's literary or artistic tastes. Strickland is a well-off, middle-class stockbroker in London sometime in late 19th or early 20th century. Early in the novel, he leaves his wife and children and goes to Paris. (The narrator enters directly into the story at this point, when he is asked by Mrs Strickland to go to Paris and talk with her husband.) He lives a destitute but defiantly content life there as an artist (specifically a painter), lodging in run-down hotels and falling prey to both illness and hunger. Strickland, in his drive to express through his art what appears to continually possess and compel him on the inside, cares nothing for physical discomfort and is indifferent to his surroundings.