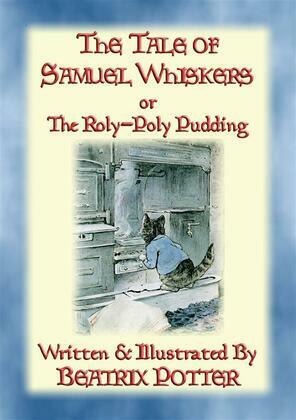 THE TALE OF SAMUEL WHISKERS or The Roly-Poly Pudding

The Tale of Samuel Whiskers or the Roly-Poly Pudding is a children's book written and illustrated by Beatrix Potter and first published in October 1908.

The theme of the tale is childhood disobedience.

Tom Kitten is a young cat who lives with his mother, Mrs. Tabitha Twitchit, and sisters, Moppet and Mittens, in a house overrun with rats. The kittens are an unruly bunch, Mrs. Twitchit puts Moppet and Mittens in a cupboard in order to keep them under control, but Tom Kitten escapes up the chimney. As he makes his way to the top of the house, he comes across a crack in the wall and, squeezing through it, finds himself under the attic's floorboards. There he meets the rats, Mr. Samuel Whiskers and his wife Anna Maria. They catch him and proceed to cover him with butter and dough they have stolen in order to eat him as a pudding.

John Joiner, the carpenter, is called and he saws open the floor and rescues Tom who has the dough removed, before being washed, and the remains of the dumpling are eaten by the family.

Whiskers and his wife escape to the barn of Farmer Potatoes, spreading their chaos to another location, though leaving the cat family residence in peace. Potter mentions herself as seeing Samuel Whiskers and Anna Maria making their escape, using a wheelbarrow that looks like her own. Tom is so affected by the incident that while his sisters become fine rat-catchers he is afraid of anything larger than a mouse.