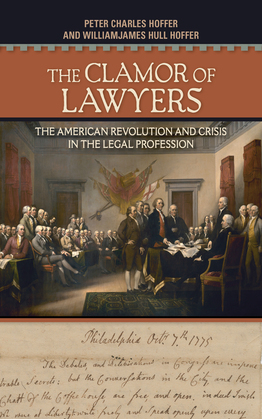 The Clamor of Lawyers

The Clamor of Lawyers explores a series of extended public pronouncements that British North American colonial lawyers crafted between 1761 and 1776. Most, though not all, were composed outside of the courtroom and detached from on-going litigation. While they have been studied as political theory, these writings and speeches are rarely viewed as the work of active lawyers, despite the fact that key protagonists in the story of American independence were members of the bar with extensive practices. The American Revolution was, in fact, a lawyers’ revolution.

Peter Charles Hoffer and Williamjames Hull Hoffer broaden our understanding of the role that lawyers played in framing and resolving the British imperial crisis. The revolutionary lawyers, including John Adams’s idol James Otis, Jr., Pennsylvania’s John Dickinson, and Virginians Thomas Jefferson and Patrick Henry, along with Adams and others, deployed the skills of their profession to further the public welfare in challenging times. They were the framers of the American Revolution and the governments that followed. Loyalist lawyers and lawyers for the crown also participated in this public discourse, but because they lost out in the end, their arguments are often slighted or ignored in popular accounts. This division within the colonial legal profession is central to understanding the American Republic that resulted from the Revolution.