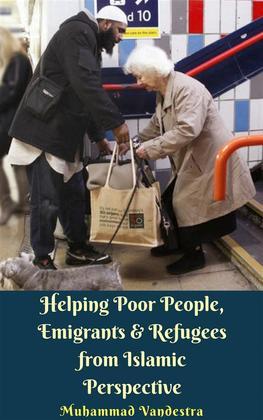 The world is experiencing an unprecedented refugee crisis as millions of people are forced from their homes and involuntarily displaced due to conflict, war, and poverty. In particular, there are an estimated four million refugees from Syria due to the civil war. Many of these people do not have sufficient food, clothing, or shelter, and they are not receiving enough assistance from neighboring countries due to a lack of resources.

Every human being, regardless of their faith, has a natural right in Islam to food, clothing, and shelter.

Uthman ibn Affan reported: The Prophet, peace and blessings be upon him, said:

There is no right for the son of Adam except in these things: a house in which he lives, a garment to cover his nakedness, a piece of bread and water. (Sunan At-Tirmidhi 2341)

It is our duty in Islam to help these refugees and asylum seekers to the extent of our capability, just as we would wish someone would help us if we were in their place.

The story of Islam is one of the triumph of faith and brotherhood in the face of persecution. When the Muslims of Mecca, known as the Muhajirun (the emigrants), were being tortured and killed for their faith, the Muslims of Medina, known as the Ansar (the supporters), brought them into their homes and cared for them as if they were members of their own family.

They love those who emigrated to them and find not any desire in their hearts of what the emigrants were given, but rather give them preference over themselves, even though they are in privation. Whoever is protected from the greediness of his own soul, then those will be successful. (Surat Al-Hashr 59:9)

The righteous companions did not consider the emigrants to be a nuisance, but rather they accepted them with open arms and loved them, even giving these refugees preference over their own selves although they were in poverty.

The parable of the believers in support of each other is that of the bricks of a building. Each brick is held up by the others bricks and all of them require each other’s support to remain standing.