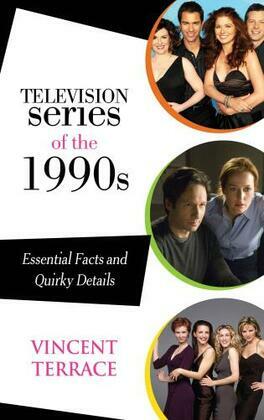 Television Series of the 1990s

In the 1990s the big three networks were being challenged by upstarts FOX and the WB for viewer loyalty. Alongside must-see stalwarts like Frasier, Friends, and Seinfeld, the new networks introduced pop culture touchstones like Buffy the Vampire Slayer and The X-Files. Such shows would not only make household names of their stars, they would thrive in syndication and some even graduated to the big screen. In that decade, shows such as ER, Everybody Loves Raymond, and Northern Exposure were vying for awards while programs like Beverly Hills, 90210 and Home Improvement drew in millions of viewers each week. Even after these shows departed the airwaves, they live on in syndication and on DVDs, entertaining many generations of viewers.

In Television Series of the 1990s: Essential Facts and Quirky Details, Vincent Terrace presents readers with a cornucopia of information about sixty programs from the decade. For example, did you know that Ally McBeal’s favorite brand of ice cream is Ben and Jerry’s? Or that Hank Hill’s shoe size is 12? Or that Carrie Bradshaw’s favorite cookie is Double-Stuff Oreos? These are just a handful of hundreds of fun and intriguing specifics found inside this volume. Programs from all of the major networks—as well as select syndicated programs and HBO—are represented here.

This is not a book of opinions or essays about specific television programs but a treasure trove of facts associated with each show. From Niles Crane’s I.Q score to George Constanza’s high score on Frogger, readers will discover a wealth of fascinating information that, for the most part, cannot be found elsewhere. In some cases, the factual data detailed herein is the only such documentation that currently exists on bygone shows of the era. Television Series of the 1990s is the ideal reference for fans of this decade and anyone looking to stump even the most knowledgeable trivia expert.