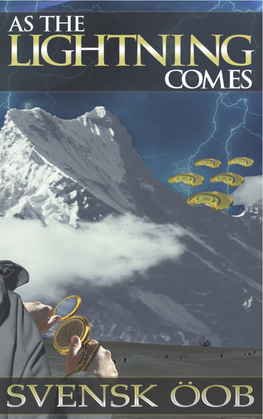 As the Lightning Comes

This fast paced adventure is like The Bible Code meets The Chariots of the Gods. It weaves together the fascinating themes of ancient astronauts, angel visitations, hidden Bible codes and end time prophecies, with an international conspiracy thrown in.

The story follows the quest of cynical lawyer John Marshall to locate the Tree of Knowledge and then to pass on the key to it to the one called the Son of Man.

Marshall unwittingly becomes the last custodian of the key when he tries to come to the rescue of an elderly Eastern wise man.

He teams up with fellow American, evangelist and one time Middle Eastern linguistic expert, Marc Arnold. Arnold ropes in the assistance of longtime friend, Kirsty Gordon, a Scottish aristocrat and archaeologist. Their quest across three continents is thwarted by dark forces apparently hell bent on grasping the key from them for an as yet unknown nefarious purpose.

The key is an ancient artefact that guides and gives access to a subterranean installation. This is the remnant of a long lost civilization, of which the Atlantians were a part. Modern technology has not yet caught up with that of the ancients, which ultimately contributed towards their downfall.

The installation, located in the bowels of a Nepalese mountain, houses an arsenal of futuristic flying craft of the sort mistakenly labelled as UFOs. It is also the repository of an electronic archive of the long forgotten past, shades of which were captured in myth, folklore and religion, known as the Tree of Knowledge...

Through the centuries, various historical characters including the Chinese strategist Sun Tzu (author of the Art of War), Nostradamus and Hitler have gained access to the Tree of Knowledge. What they learnt changed the destiny of mankind and provided a peek into the future.

Will the trio find the Tree of Knowledge and identify and locate the Messiah in time to thwart the Antichrist and save the Earth from the immense meteorite storm that is on a collision course with it? The final countdown has commenced.