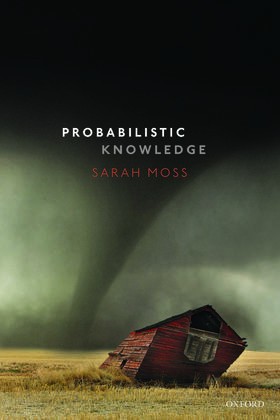 Traditional philosophical discussions of knowledge have focused on the epistemic status of full beliefs. Sarah Moss argues that in addition to full beliefs, credences can constitute knowledge. For instance, your 0.4 credence that it is raining outside can constitute knowledge, in just the same way that your full beliefs can. In addition, you can know that it might be raining, and that if it is raining then it is probably cloudy, where this knowledge is not knowledge
of propositions, but of probabilistic contents.
The notion of probabilistic content introduced in this book plays a central role not only in epistemology, but in the philosophy of mind and language as well. Just as tradition holds that you believe and assert propositions, you can believe and assert probabilistic contents. Accepting that we can believe, assert, and know probabilistic contents has significant consequences for many philosophical debates, including debates about the relationship between full belief and credence, the semantics of
epistemic modals and conditionals, the contents of perceptual experience, peer disagreement, pragmatic encroachment, perceptual dogmatism, and transformative experience. In addition, accepting probabilistic knowledge can help us discredit negative evaluations of female speech, explain why merely
statistical evidence is insufficient for legal proof, and identify epistemic norms violated by acts of racial profiling. Hence the central theses of this book not only help us better understand the nature of our own mental states, but also help us better understand the nature of our responsibilities to each other.