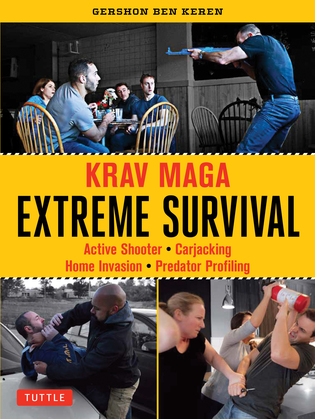 Trained by the top Israeli Defense Forces' instructors, Gershon Ben Keren is one of the foremost experts on the martial art of Krav Magra. In his third book, Ben Keren explains how to survive life-threatening real-world offenses—terrorists, active shooters, carjackers, home invaders—and demonstrates how Krav Maga can be employed to respond to them.

Each section of Extreme Survival provides detailed instructions alongside a series of photographs that show move-by-move how to defend yourself and others against:

A 2011 inductee into the Museum of Israeli Martial Arts, Ben Keren focuses on the psychology of violence to inform his self-defense training. His successful line of Krav Magra instructional books are the only guides on the market illustrated with full-color photographs taken in real time and in real life settings. Emphasizing an awareness of your surroundings combined with an aggressive response, Extreme Survival teaches practitioners to neutralize an assailant's advantage early, before the situation escalates.