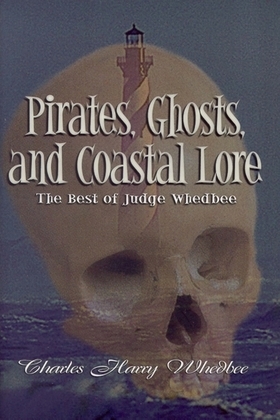 In 1963, Judge Charles Whedbee was asked to substitute on a morning show calledCarolina Today on Greenville, North Carolina's, television station while one of the program's regulars was in the hospital. Whedbee took the opportunity to tell some of the Outer Banks stories he'd heard during his many summers at Nags Head. The station received such a volume of mail in praise of his tale-telling that he was invited to remain even after the man he was substituting for returned to the air. "He had a way of telling a story that really captured me," said one of the program's co-hosts. "Whether he was talking about a sunset, a ghost, or a shipwreck, I was there, living every minute of it." Word traveled as far as Winston-Salem, where John F. Blair proposed to Whedbee that he compile his stories in book form. Whedbee welcomed the challenge, though his expectations for the manuscript that became Legends of the Outer Banks and Tar Heel Tidewater were modest. "I wrote it out of a love for this region and the people whom I'd known all my life," he said. "I didn't think it would sell a hundred copies." From the very first sentence of the foreword, Whedbee stamped the collection with his inimitable style: "You are handed herewith a small pod or school of legends about various portions of that magical region known as the Outer Banks of North Carolina as well as stories from other sections of the broad bays, sounds, and estuaries that make up tidewater Tarheelia." The Lost Colony, Indians, Blackbeard, an albino porpoise that guided ships into harbor—the tales in that volume form the core of Outer Banks folklore. Whedbee liked to tell people that his stories were of three kinds: those he knew to be true, those he believed to be true, and those he fabricated. But despite much prodding, he never revealed which were which. Legends of the Outer Banks went through three printings in 1966, its first year. Demand for Whedbee's tales and the author's supply of good material were such that further volumes were inevitable. The Flaming Ship of Ocracoke & Other Tales of the Outer Banks was published in 1971, Outer Banks Mysteries & Seaside Stories in 1978, Outer Banks Tales to Remember in 1985, andBlackbeard's Cup and Stories of the Outer Banks in 1989. Although Judge Whedbee died in 1990, his legacy lives on through his folklore. And so it was fitting that in 2004, the 50th anniversary of John F. Blair, Publisher, that the company should release this volume of the 13 stories that the Blair staff felt were the best of Charles Harry Whedbee.