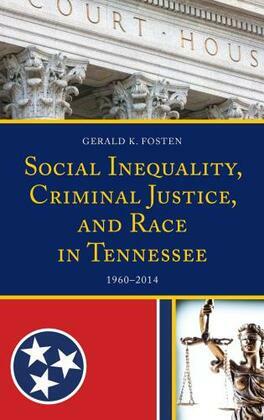 This book examines the national criminal justice system’s and the state of Tennessee criminal justice system’s policies in terms of how they balance the citizens’ need for prisons with the private sector's desire for profits and the policies’ effects on the incarceration rate of African American males in the state of Tennessee. There are important, often neglected, connections among prison sentencing, felony disenfranchisement, voting, and the continuing problematic issues of race in America, particularly in Tennessee. This state serves as a representative case study from which to examine local, state, and national criminal justice systems, disparate outcomes, and social inequality. The book therefore investigates ethically questionable public-private business relationships and arrangements that contribute to socially-constructed economic policy instruments used to fulfill conservatives and white supremacists’ objectives for white domination in Tennessee. Through mass incarceration and felony disenfranchisement, African Americans—in particular, African American males—have been discriminated against and systematically excluded from political participation, employment, housing, education, and other social programs. This book is grounded on the Racial Contract Theory and Racial Group Threat Theory (Racial Threat Theory or Group Threat Theory). The Racial Contract Theory is used to show how racism itself is an intentionally devised, institutionalized, political arrangement of official and unofficial rule, of official and unofficial policy, socioeconomic benefit, and norms for the preferential distribution of material wealth and opportunities. The Racial Group Threat Theory is employed to demonstrate how growth in the comparative size of a subordinate group increases that group’s capacity to use democratic political and economic institutions for its benefit at the expense of the dominant group.