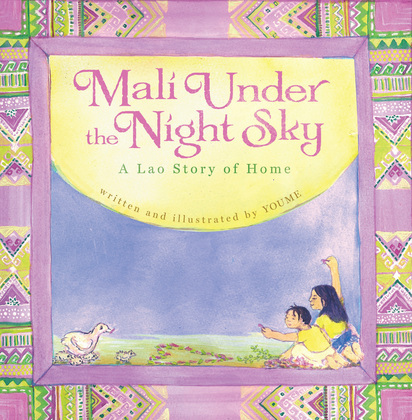 Mali Under the Night Sky

Mali Under the Night Sky, a 2011 Skipping Stones honor book, is the true story of Laotian American artist Malichansouk Kouanchao, whose family was forced by civil war to flee Laos when she was five. Before the war began, Mali lived an idyllic life in a community where she felt safe and was much loved. But the coming war caused her family to flee to another country and a life that was less than ideal. What did she carry with her? She carried her memories. And they in turn carried her across the world, sharing where she is from and all that she loves with the people she meets.

Terry Hong of the Smithsonian Asian Pacific American Program’s BOOK DRAGON, giving context to Youme’s remarkable book, said, “Today, December 7, marks the 69th anniversary of the attack on Pearl Harbor, ‘a date which will live in infamy,’… Seven decades later, infamy lives on, stealing childhoods, families, homes, lives. Now as another year comes to a close, we pray for peace … again and again … again and again … [Mali Under the Night Sky] is another hopeful, urgent prayer.” And the Midwest Book Review calls it “a soul-stirring picturebook about the difficulties faced by wartime refugees, and deserves the highest recommendation.”

Youme Landowne is an energetic and joyful painter, book artist, and activist who thrives in the context of public art. Youme has lived in and learned from the United States, Kenya, Japan, Laos, Haiti, and Cuba. In all of these places, she has worked with communities and individuals to make art that honors personal and cultural wisdom, creating community murals, illustrating tiny books, and teaching poetry in schools.