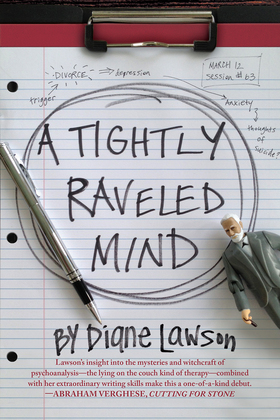 "Diane Lawson's amazing insight into the mysteries and witchcraft of psychoanalysis . . . combined with her extraordinary writing skills makes this a one-of-a-kind novel that I found impossible to put down."—Abraham Verghese, author of Cutting for Stone

Sigmund Freud would have liked Dr. Nora Goodman, a sexy forty-something psychoanalyst with her handful of neurotic patients who can't seem to allow themselves happiness, love, or success. She's not exactly a steady customer herself, born to a ranting bipolar Talmudic scholar and a mother with a heart as cold as a slaughterhouse on the Kansas prairie in January. But now she has two kids and an overbearing psychiatrist husband. She hates him. She hates his insular social world. Nora wants a new life sans husband, but what she gets is something terribly different. It starts one Monday morning when her eight o'clock patient blows himself to smithereens. The following week, another patient dies. The police see the first as an accident, the second a straightforward suicide. Nora thinks her practice is being targeted by a killer. She hires private investigator Mike Ruiz, a tightly wound ex-cop who couldn't care less for Sigmund. "Oh, Freud," Mike says. "Isn't he dead?" Freud is always watching while the unlikely pair struggle to an unexpected end.

Diane Lawson was born and raised in La Russell, Missouri (population 128). She did her undergraduate studies at the University of Missouri, her psychiatric residency at Michael Reese Hospital in Chicago, and her psychoanalytic training at the Institute for Psychoanalysis, also in Chicago. She has two children and lives and practices in San Antonio, Texas.