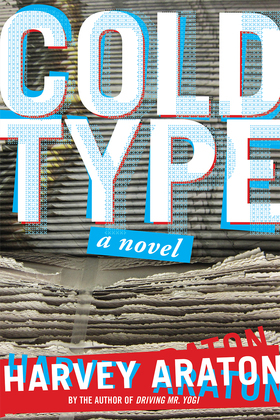 Harvey Araton writes, with keen insight, of a time when power was ebbing fast from both newspapers and their unions. It’s an especially bittersweet tale he tells of the people who had grown up in newspapers and unions, as they struggle to adapt to this evolving new order. And, of course, what makes this even more evocative, is that we’re still trying to sort this all out. — Frank Deford, author of Everybody’s All-American, NPR commentator

"Father and son face their demons, each other, and a depressingly realistic publisher in a newspaper yarn that made me yell "Hold the Front Page" for Harvey Araton's rousing debut as a novelist." — Robert Lipsyte, author of An Accidental Sportswriter

In times of change, American novelists return to old themes. In Cold Type—as in Arthur Miller's Death of a Salesman—a son and his father struggle to hold onto what they think is right. It's mid-1990s; and "cold type" technology, a.k.a. computerized typesetting, wreaks havoc among workers in the newspaper industry. A fabulously wealthy Briton buys the New York City Trib and immediately refuses to negotiate with the truck drivers' union. In solidarity, all the other blue collar unions take to the streets. Jamie Kramer is a reporter for the Trib. His father is a hardcore shop steward (unusual for a Jew in Irish-dominated unions) from the old day of "hot type," but who has become a typographer in a world he doesn't understand. His father expects Jamie not to cross the picket line. It would be an act of supreme disrespect. But that's not so easy for Jamie. His marriage has fallen apart, he desperately needs his paycheck for child support, and he needs to make his own life outside the shadow of his father.

Harvey Araton is a celebrated sports reporter and columnist for the New York Times. He authored the New York Times best-seller Driving Mr. Yogi: Yogi Berra, Ron Guidry, and Baseball's Greatest Gift; plus When the Garden Was Eden: Clyde, the Captain, Dollar Bill, and the Glory Days of the New York Knicks. Araton also finds time to serve as adjunct professor in sports writing at Montclair State University in New Jersey where he lives.