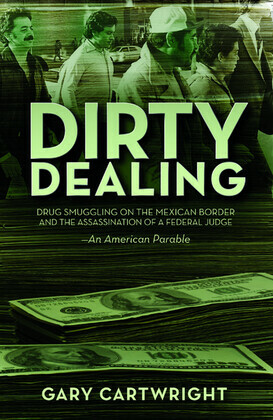 "Cartwright tells the story of the Chagra brothers, Lee and Joe, as they get mixed up with the drug-running community along the border and in short order find themselves hopelessly entangled in a net cast by the DEA. Even readers unfamiliar with the well-publicized events of the book or of the dark, lawless aspect that often rules El Paso will find themselves pulled along by the plot: brigands and intrigue leap from almost every page, and the story just gets wilder the further into it you venture."—from an Amazon.com review

Four pages into this rollicking good story, the central figure, Lee Chagra, comes alive: "[Lee] washed his morning cocaine down with strong coffee and remembered the time he had met Sinatra, how genuine he appeared." Everything you'll need to know and remember about Chagra—the son of Syrian immigrants to Mexico and an attorney who spun the world of dope-running, border-crossing, high-living outlaws along the El Paso–Juarez border around his finger like the gaudy rings he favored—can be neatly summarized in that one sentence. Chagra dies two pages later, yet he haunts the rest of this cautionary tale like a high-rolling specter.

Gary Cartwright is a long-respected, award-winning journalist and contributing editor to Texas Monthly magazine. The author of numerous books, he has contributed stories to such national publications as Harper's, Life, and Esquire. He lives in Austin, Texas.