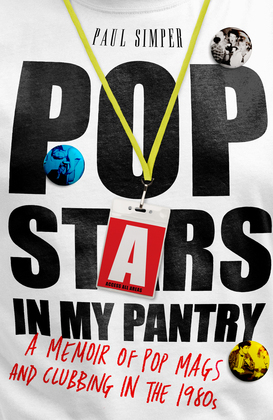 Pop Stars in My Pantry: A Memoir of Pop Mags and Clubbing in the 1980s

Corrupted by Spandau. Slated by Boy George. Mothered by Sade. Evicted by Bananarama. Jilted by Madonna.

Author, columnist and TV writer Paul Simper had a front-row seat at one of pop stardom's most exciting shows: the 1980s. His memoir, Pop Stars in My Pantry, is an account of a wide-eyed, wet-behind-the-ears lad from Wiltshire landing in London just as the capital's club scene went into orbit. As a pop writer and fellow clubber, he had unique access to the artists who would become the biggest pop acts of the decade.

On any given day, he might be required to fly a reader to the other side of the world to hang out with Spandau Ballet, accompany Bananarama's Keren and Wham!'s George Michael on a blind date, help Frankie Goes to Hollywood chuck furniture out of TV studio windows in Rome, watch Boy George styling and flirting with Paul Weller in fake furs, or walk off into the sunset with a newbie called Madonna.

It is also the tale of his own attempts at pop stardom with the help of former 'Nana Miss Jacqueline O'Sullivan and an unexpected bonus career as a showbiz party DJ for the likes of Prince, Whitney, Elton and even Al Pacino.

This is an endlessly entertaining, behind-the-scenes ride - the ultimate back-stage pass - for 1980s pop enthusiasts and lovers of Smash Hits... from the man who saw it all.