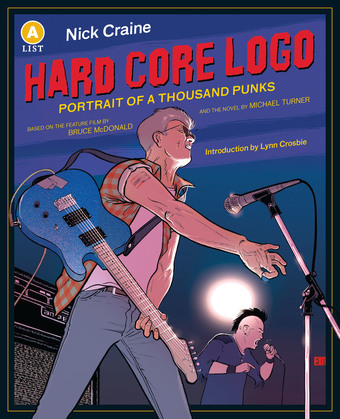 by Nick Craine (Author)
Buy for $9.99 Excerpt
Fiction Comics & graphic novels Nonfiction Arts Music Punk
warning_amber
One or more licenses for this book have been acquired by your organisation details

The twentieth-anniversary edition of Nick Craine’s searing graphic novel about a legendary Canadian punk band, based on the feature film by Bruce McDonald and the novel by Michael Turner.

Joe Dick coaxes his former bandmates to overcome personal differences and reunite for a benefit concert for their ageing punk mentor, Bucky Haight, who has been shot. But the concert’s not enough for Joe; he wants the band to hit the road again. For the Hard Cores this means the beginning of the end, and they come to realize that they can neither relive nor alter the past.

From the pen of hugely talented Canadian comic artist and illustrator Nick Craine comes a searing rendition of those Hard Core days and nights. In this graphic take on the story originally conceived by Michael Turner and made into a critically acclaimed film by Bruce McDonald, Craine pits the legendary Hard Cores against a collage-like backdrop of bars, hotel rooms, the road, and the Canadian Prairies.

Featuring a new introduction by Lynn Crosbie and a tear-out guitar chord book, Hard Core Logo: Portrait of a Thousand Punks weaves together a patchwork narrative of found art, dialogue, songs, and incidental bystanders. Craine skillfully renders his own unique cover-version of this cult film classic in graphic novel form.