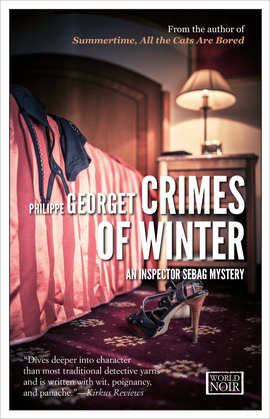 "This winter is going to be a rough one for Gilles Sebag, a police inspector in the sleepy French seaside town of Perpignan. After many long months of doubt, he has discovered the terrible truth: Claire has been cheating on him. Vacillating between depression, whisky, and insomnia, he buries himself in work in an attempt to forget the ugly realization that he has been betrayed. But his investigations lead him inexorably toward other tragedies: a woman murdered in a hotel, a depressed man who throws himself from the roof of his building, another who threatens to blow up the neighborhood.

Whether it be by chance or due to Murphy’s law, Perpignan seems to be suffering from a veritable epidemic of crimes of passion. Adultery is everywhere! And each betrayal leads to another dramatic crime.

Sebag, the protagonist of Summertime, All the Cats Are Bored and Autumn, All the Cats Return, has an unparalleled ability to slip into the skin of his suspects and solve apparently unsolvable crimes. But though an unnaturally skilled investigator, he is unlucky in love. He is a perfect protagonist for the coastal French town of Perpignan, which is almost everything except what it seems."