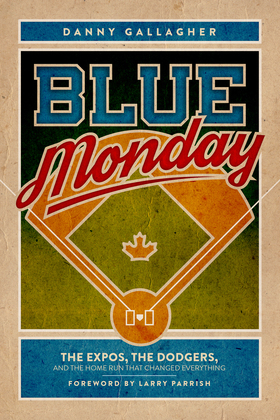 Blue Monday: one of the most unforgettable days in Canadian baseball history.

Author and Montreal Expos historian Danny Gallagher leads readers up to the unforgettable day in October 1981 when Rick Monday of the Los Angeles Dodgers hit a home run off of Montreal Expos pitcher Steve Rogers in the ninth inning to give the Dodgers a berth in the World Series. Readers will be taken back to 1976 when a five-year Expos’s plan for winning the National League championship was set in place with the hiring of experienced manager Dick Williams. Gallagher unearths secrets and stories never told by various Expos and Dodgers. He examines old narratives about Blue Monday and talked to all the key players involved in the game. The book is a tribute to the Expos and Dodgers but especially Rogers and Monday, the two pivotal characters in the final playoff game.