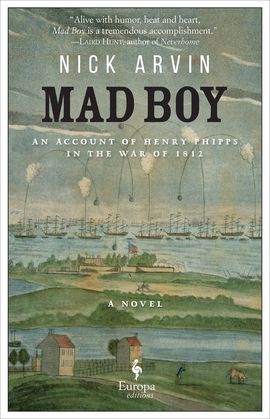 Mad Boy is a rollicking, picaresque novel about family and perseverance set during America’s “forgotten war” of 1812.

Young Henry Phipps is on a quest to realize his dying mother’s last wish: to be buried at sea, surrounded by her family. Not an easy task considering Henry’s ne’er-do-well father is in debtor’s prison and his comically earnest older brother is busy fighting the red coats on the battlefields of Maryland. But Henry’s stubborn determination knows no bounds. As he dodges the cannon fire of clashing armies and picks among the ruins of a burning capital he meets looters, British defectors, renegade slaves, a pregnant maiden in distress, and scoundrels of all types. Mad Boy is at once an antic adventure and a thoroughly convincing work of historical fiction that recreates a young nation’s first truly international conflict and a key moment in the history of the emancipation of African-American slaves.

Entertaining, atmospheric, and touching, Mad Boy will transport readers with its cast of vivid characters, its masterful storytelling, and its poignant tale of a young man burdened by an outsized undertaking.