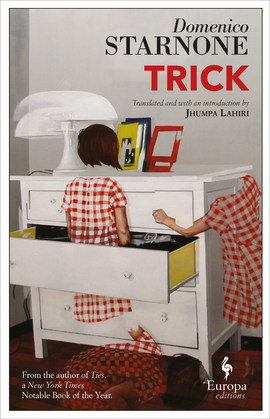 Imagine a duel between an elderly man and a mere boy. The same blood runs through their veins. One, Daniele Mallarico, is a successful illustrator whose reputation is slowly fading. The other, Mario, is his four-year-old grandson. The older combatant has lived for years in solitude, focusing obsessively on his work. The younger one has been left by his querulous parents with his grandfather for a 72-hour stay. Shut inside an apartment in Naples that is filled with the ghosts of Mallarico’s own childhood, grandfather and grandson match wits, while outside lurks Naples, a wily, violent, and passionate city whose influence is not easily shaken.

Trick is a gripping, wry, brilliantly devised drama, “an extremely playful literary composition,” as Jhumpa Lahiri describes it in her introduction, about aging, family, art, and reconciling with one’s past.