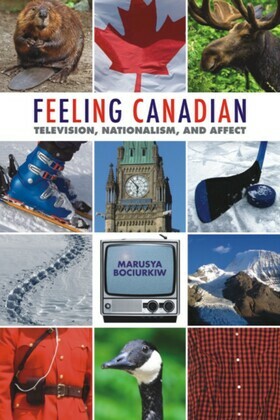 "My name is Joe, and I AM Canadian!" How did a beer ad featuring an unassuming guy in a plaid shirt become a national anthem? This book about Canadian TV examines how affect and consumption work together, producing national practices framed by the television screen. Drawing on the new field of affect theory, Feeling Canadian: Television, Nationalism, and Affect tracks the ways that ideas about the Canadian nation flow from screen to audience and then from body to body.

From the most recent Quebec referendum to 9/11 and current news coverage of the so-called "terrorist threat," media theorist Marusya Bociurkiw argues that a significant intensifying of nationalist content on Canadian television became apparent after 1995. Close readings of TV shows and news items such as Canada: A People's History, North of 60, and coverage of the funeral of Pierre Trudeau reveal how television works to resolve the imagined community of nation, as well as the idea of a national self and national others, via affect. Affect theory, with its notions of changeability, fluidity, and contagion, is, the author argues, well suited to the study of television and its audience.

Useful for scholars and students of media studies, communications theory, and national television and for anyone interested in Canadian popular culture, this highly readable book fills the need for critical scholarly analysis of Canadian television's nationalist practices.