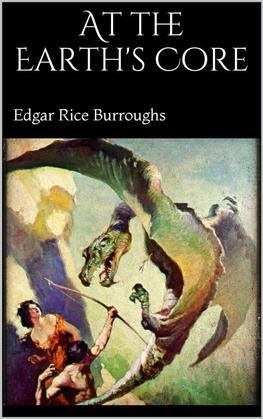 At the Earth's Core

IN THE FIRST PLACE PLEASE BEAR IN MIND THAT I do not expect you to believe this story. Nor could you wonder had you witnessed a recent experience of mine when, in the armor of blissful and stupendous ignorance, I gaily narrated the gist of it to a Fellow of the Royal Geological Society on the occasion of my last trip to London. You would surely have thought that I had been detected in no less a heinous crime than the purloining of the Crown Jewels from the Tower, or putting poison in the coffee of His Majesty the King. The erudite gentleman in whom I confided congealed before I was half through!—it is all that saved him from exploding—and my dreams of an Honorary Fellowship, gold medals, and a niche in the Hall of Fame faded into the thin, cold air of his arctic atmosphere. But I believe the story, and so would you, and so would the learned Fellow of the Royal Geological Society, had you and he heard it from the lips of the man who told it to me. Had you seen, as I did, the fire of truth in those gray eyes; had you felt the ring of sincerity in that quiet voice; had you realized the pathos of it all—you, too, would believe. You would not have needed the final ocular proof that I had—the weird rhamphorhynchus-like creature which he had brought back with him from the inner world.