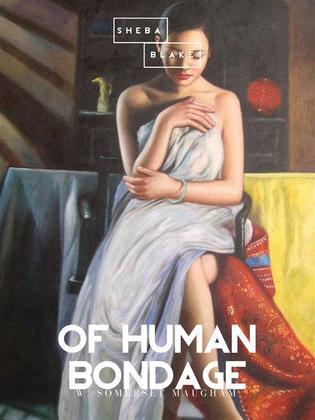 Of Human Bondage is a novel by W. Somerset Maugham. It is generally agreed to be his masterpiece and to be strongly autobiographical in nature, although Maugham stated, "This is a novel, not an autobiography, though much in it is autobiographical, more is pure invention." Maugham, who had originally planned to call his novel Beauty from Ashes, finally settled on a title taken from a section of Spinoza's Ethics. The Modern Library ranked Of Human Bondage No. 66 on its list of the 100 best English-language novels of the 20th century.

The book begins with the death of Helen Carey, the much beloved mother of nine-year-old Philip Carey. Philip has a club foot and his father had died a few months before. Now orphaned, he is sent to live with his aunt Louisa and uncle William Carey.

Early chapters relate Philip's experiences at his uncle's vicarage. Aunt Louisa tries to be a mother to Philip, but his uncle takes a cold disposition towards him. Philip's uncle has a vast collection of books, and Philip enjoys reading to find ways to escape his mundane existence. Less than a year later, Philip is sent to a boarding school. His uncle and aunt wish for him to eventually attend Oxford. Philip's disability and sensitive nature make it difficult for him to fit in with the other students. Philip is informed that he could have earned a scholarship for Oxford, which both his uncle and school headmaster see as a wise course, but Philip insists on going to Germany.

In Germany, Philip lives at a boarding house with other foreigners. He enjoys his stay in Germany. Philip's guardians decide to take matters into their own hands and they persuade him to move to London to take up an apprenticeship. He does not fare well there as his co-workers resent him, because they believe he is a "gentleman". He goes on a business trip with one of his managers to Paris and is inspired by the trip to study art in France. In France, Philip attends art classes and makes new friends, including Fanny Price, a poor and determined but talentless art student who does not get along well with people. Fanny Price falls in love with Philip, but he does not know and has no such feelings for her; she subsequently commits suicide.