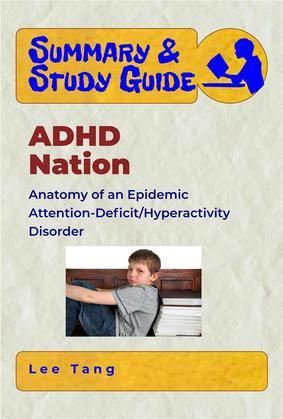 Everyone who works with children should read this book.

This book is a summary of “ADHD Nation: Children, Doctors, Big Pharma, and the Making of an American Epidemic,” by Alan Schwarz.

Attention-deficit/hyperactivity disorder (ADHD) is a biological disorder of the brain that can be treated with medications when appropriate. In the 1980s, only 3 percent of American children were diagnosed with ADHD. But now that number is 15 percent—three times what the experts have said is appropriate. Meanwhile, the prevalence of ADHD in other countries such as France, Finland, and Japan, has remained low at below 1 percent. This means that millions of American kids, some as young as three years old, are misdiagnosed and taking powerful stimulant medications like Adderall and Ritalin for a psychiatric condition they probably do not have.

This book reveals the powerful forces fueling its widespread diagnosis and drug treatment through the experiences of three people. One is the father of ADHD and its medications, who now regrets its current misuse. The second is a 7-year-old girl who was misdiagnosed with ADHD. The third is a 14-year-old boy who faked symptoms to get the drug. Both kids spent ten years suffering the consequences of using the medication.

Read this summary if you are a parent, professional or individual who is dealing with the diagnosis and treatment of ADHD.

Value-added from this guide: