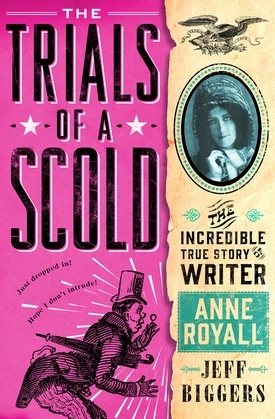 The Trials of a Scold

The Trials of a Scold, by American Book Award-winning author Jeff Biggers, is a well-researched and passionate biography of Anne Royall, one of America's first female muckrakers, who was convicted as a "common scold" in 1829 in one of the most bizarre trials in the nation's history.

Anne Royall was an American original, a stranger to fear, and one of the nation's most daring, impassioned, and indomitable social critics. A servant in the house of the man she would later marry, Royall read constantly and pursued an education that few women at that time had access to. When fifteen years later she was left widowed and destitute after her husband's family declared their marriage invalid, she turned to her writing, and to her political interests.

Travelling from Alabama to Washington DC to Pennsylvania, Royall was a fiercely dedicated journalist. Her tenacity earned her the first presidential interview ever granted to a woman, but she acquired enemies for her scathing denouncement of the increasingly blurry lines between church and state.