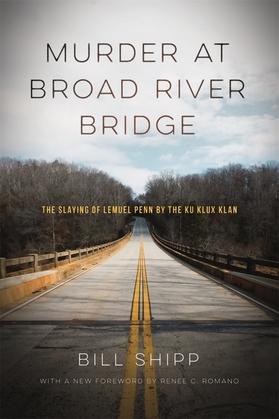 Murder at Broad River Bridge: The Slaying of Lemuel Penn by the Ku Klux Klan

<p>First published in 1981, <i>Murder at the Broad River Bridge</i> recounts the stunning details of the murder of Lieutenant Colonel Lemuel Penn by the Ku Klux Klan on a back-country Georgia road in 1964, nine days after the passage of the Civil Rights Act. Longtime <i>Atlanta Constitution</i> reporter Bill Shipp gives us, with shattering power, the true story of how a good, innocent, "uninvolved" man was killed during the Civil Rights turbulence of the mid-1960s. Penn was a decorated veteran of World War II, a United States Army Reserve officer, and an African American, killed by racist, white vigilantes as he was driving home to Washington, D.C. from Fort Benning, Georgia. </p><p>Shipp recounts the details of the blind and lawless force that took Penn’s life and the sorry mask of protective patriotism it hid behind. To read <i>Murder at Broad River Bridge </i>is to know with deep shock that it could be dated today, tonight, tomorrow. It is a vastly moving documentary drama.</p>