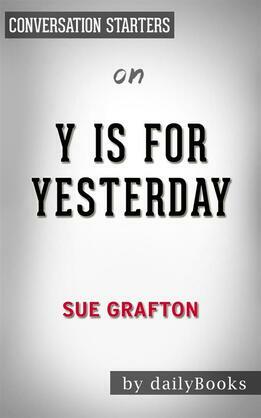 Y is for Yesterday: by Sue Grafton | Conversation Starters

Y is for Yesterday: by Sue Grafton | Conversation Starters

In Y is for Yesterday, readers are treated to a thrilling ride that follows private investigator Kinsey Millhone during one of the most disturbing cases of her career. The story centers around a 1979 assault, after which three of the perpetrators suffer the consequences of their actions. The ringleader escapes, however, leaving no trace of his whereabouts. Ten years later, one of the perpetrators is released from prison and receives a ransom demand along with the missing tape of the assault. Millhone is brought in to help.

Sue Grafton’s twenty-fifth novel in the Alphabet Mystery series, Y is for Yesterday follows the fan-favorite Kinsey during a harrowing investigation that coincides with the possible entry of a new threat into the P.I.’s life. The beloved character’s return was met with much fanfare, prompting some to “wish there were more than twenty-six letters.” Many readers enjoy the thrilling and original stories of the series, returning for the drama as much as the storytelling itself.