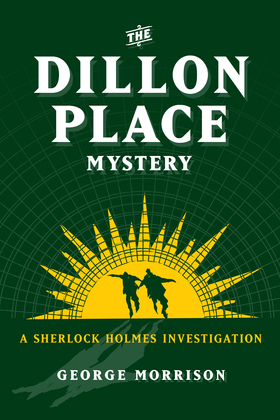 On the eve of the Queen’s state visit to Ireland, Sherlock Holmes receives an unusual visit from Sir Richard Waltham, the Parliamentary Secretary to the Home Office. Soon he and Watson are steaming for the shores of Queenstown in Dublin, charged with exposing an audacious conspiracy to shake the very foundations of the Empire.

‘I’d better start packing, Holmes. What do you suggest I take?’

‘Stout travelling clothes and boots, heavy overcoats and oilskins, fishing tackle for sea-fishing as well as our trout rods, evening dress, and I think, perhaps, Watson, your old service revolver.’

The game is afoot …

The Dillon Place Mystery is a brilliant new Sherlock Holmes adventure, set for the first time in Ireland, from the pen of critically acclaimed filmmaker and photographer George Morrison, for whom the reading and writing of Holmes has been a lifelong passion.

George Morrison is one of Ireland’s most distinguished filmmakers and photographic restorers. Now in his nineties, he was born in Tramore, Co. Waterford, and is best known for his films Mise Éire (1959) and Saoirse? (1961). He has also made many documentaries and produced a number of important photographic books on modern Irish history, including The Irish Civil War with Tim Pat Coogan. His wife was the legendary Irish Times cookery writer Theodora FitzGibbon.