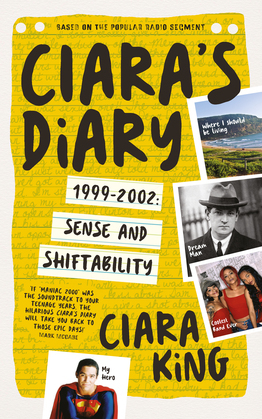 The year is 1999. Connemara is braced for the new millennium. ‘No Scrubs’ rules the airwaves, bootleg DVDs of Cruel Intentions are thrilling crowds of sexually progressive teens, and if you’re not matching combat trousers with platforms, you are nobody.

In the midst of this perplexing world, a girl named Ciara, inspired by her heroes Anne Frank and Aung San Suu Kyi, begins to document her not dissimilar struggles – against pushy parents, mysterious boys and the stubborn non-appearance of boobs. The road ahead will be tough, but she must persevere: How else will she find fame, fortune and love in the spandex-clad arms of Dean Cain?

Based on the cult radio segment of the same name, Ciara’s Diary is a fresh and funny trip through the warped mind of a turn-of-the-century teenager. The spiritual successor to Adrian Mole, albeit with more shifting, Ciara’s Diary is a must-read for anyone who remembers dancing to ‘Maniac 2000’ at the parish disco.