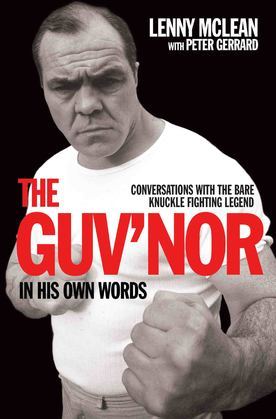 Born in East London in 1949, Lenny McLean grew up in an area that had been ravaged by the Second World War. Although money was scarce and fighting was commonplace, a camaraderie and deep sense of honour and respect remained. A victim of violent abuse at the hands of his stepfather, Lenny spent much of his teenage life in borstal as he began to follow a life of crime. However, it was his ability as a fighter that was to turn his life around.

Lenny McLean inspired fear in many, but respect from all, as he became a bare-knuckle fighting legend. His fame became even greater in later life, appearing in Guy Ritchie's Lock, Stock and Two Smoking Barrels just as his autobiography was reaching the top of the bestsellers chart. Lenny's untimely death from cancer in 1998 marked the beginning of the end of the old Cockney way of life and interest in his story has only increased since his passing, inspiring documentaries as well as a feature film, My Name is Lenny.

In these unedited conversations between Lenny and his 'book man' Peter Gerrard, featuring many anecdotes that did not appear in The Guv'nor, we get to see the man behind the public image. As he looks back on his life, these transcripts reveal Lenny's humour and charm as well as the volatility that made him one of the most notorious figures ever to emerge from the East End.