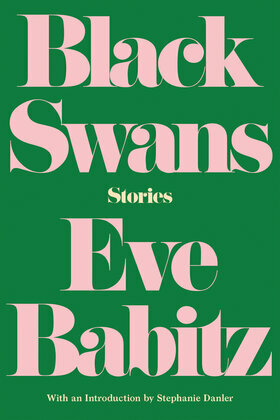 A new reissue by the writer who has been acclaimed by the Boston Globe as a "true original" and by the San Francisco Chronicle as "marvelously witty and wildly observant" and of whom Joseph Heller has said, "Her words are worth one hundred moving pictures."

Black Swans is a collection of nine stories that look back on the 1980s—a decade of dreams, drink, and stoned youth turning Republican. Babitz prowls California telling tales of a changing world. She writes about the Rodeo Gardens, about AIDS, about learning to tango, about the cemetery of Hollywood, the self-enchanted city, and, most importantly, about the envy and jealousy underneath it all.

This exciting reissue further celebrates the phenomenon of Eve Babitz, cementing her reputation as the voice of a generation.

"Eve Babitz is a little like Madame de Sevigne, that inveterate letter-writer of Louis XIV's time, transposed to the Chateau Marmont in the late 20th-Century—lunching, chatting, dressing, loving and crying in Hollywood, that latter-day Versailles." —Los Angeles Times