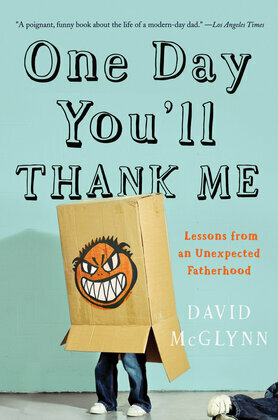 The Deep End of Fatherhood

Based on popular pieces that have appeared in The New York Times, Parents, Men's Health, Real Simple and O: the Oprah Magazine, McGlynn captures the joys, terrors, moral ambiguities, and absurdities of raising boys in modern America.


Though he grew up longing to be closer to his dad who lived three states away, fatherhood caught David McGlynn completely off guard. His sons were conceived in quick succession—the first when the author was a dirt-poor student and the second not long after he'd moved his family across the country to start a new job. As a result, McGlynn found himself colliding into fatherhood as though it were a car accident, at once scared to death and utterly thrilled. Just like many new fathers, he hopes he's doing the right thing—but he's never quite sure.


The Deep End of Fatherhood translates the small, often hilarious moments common among parents of young children, especially dads, into "life lessons" about fatherhood. Comprised of 24 interconnected chapters—many of which have appeared in such prominent publications as The New York Times, Men's Health, Parents, Real Simple, O Magazine, and elsewhere—the stories invoke a sense of humor and honesty. This is poignant memoir filled with the insights a humorous episode might yield if we pay attention, and an expanded understanding of what it means to be an American dad.