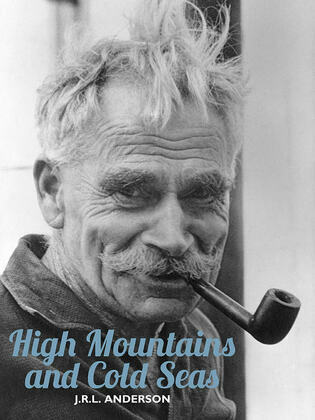 Harold William ‘Bill’ Tilman (1898 –1977) was among the greatest adventurers of his time, a pioneering mountaineer and sailor who held exploration above all else.

The son of a Liverpool sugar importer, Tilman joined the army at seventeen and was twice awarded the Military Cross for bravery during WWI. After the war Tilman left for Africa, establishing himself as a coffee grower. He met Eric Shipton and they began their famed mountaineering partnership, traversing Mount Kenya and climbing Kilimanjaro. Turning to the Himalaya, Tilman went on two Mount Everest expeditions, reaching 27,000 feet without oxygen in 1938. In 1936 he made the first ascent of Nanda Devi, the highest mountain climbed until 1950. He was the first European to climb in the remote Assam Himalaya, delved into Afghanistan’s Wakhan Corridor and explored extensively in Nepal, all the while developing a mountaineering style characterised by its simplicity and emphasis on exploration.

It was perhaps logical that Tilman would eventually buy the pilot cutter Mischief, not with the intention of retiring from travelling, but to access remote mountains. For twenty-two years he sailed Mischief and her successors in search of them—to Patagonia, where he made the first easterly crossing of the ice cap, to Baffin Island to make the first ascent of Mount Raleigh, to Greenland, Spitsbergen, and islands in the far Southern Ocean, before disappearing in the South Atlantic in 1977.

J.R.L. Anderson’s High Mountains and Cold Seas draws on a wealth of personal correspondence between Tilman—a compulsive letter writer—and his immediate family and close friends, crafting the first detailed account of the extraordinary life of this remarkable, but very private individual.