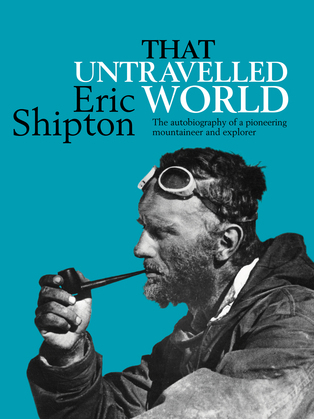 ‘It is often from our setbacks, even our weaknesses, that we derive some of our greatest blessings.’

That Untravelled World is the autobiography of one of the greatest adventurers of the twentieth century. Eric Shipton was a pioneering explorer, journeying to places that did not feature on maps and to unexplored mountains, such as the High Dauphiné.

Shipton describes early childhood days filled with adventures; his first encounter with the high mountains on a visit to the Pyrenees, and the onset of his climbing career inspired by travels in Norway with a friend. He reminisces on first meeting infamous explorer H.W. ‘Bill’ Tilman, and their first expedition together to Mount Kenya. Tilman and Shipton were later to become one of the most famous climbing partnerships of all time.

Filled with anecdotes from different periods of his life, Shipton takes us on his journey from Kilimanjaro and Mount Stanley alongside Tilman, his discovery of the route to the Nanda Devi Sanctuary, summiting Mount Kamet with mountaineering icon Frank Smythe, and multiple expeditions to Everest.

First published in 1969, That Untravelled World is the story of an adventurer who, inspired by Edward Whymper, travelled to feral landscapes across the globe, and has in turn inspired generations of climbers and mountaineers.