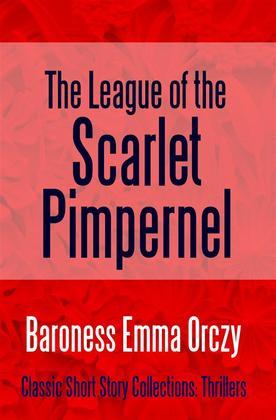 The League of the Scarlet Pimpernel

The League of the Scarlet Pimpernel is a sequel book to the classic adventure tale, The Scarlet Pimpernel. Written by Baroness Orczy and first published in 1919, the book consists of eleven short stories about Sir Percy Blakeney's exploits in rescuing various aristos and French citizens from the clutches of the guillotine.

The stories are set in 1793 but appear in no particular order. They occasionally refer to events in other books in the series.

Madeleine Lannoy, whose husband was killed at Versailles defending the Queen from the mob, has become a street dancer in the worst parts of Paris. She has taken on this guise in the hope of finding her only son who has been stolen by Citizen Jean Paul Marat, annoyed by her spurning his advances. All she knows is that her child "is to be reared up in the company of all that is most vile and most degraded in the disease-haunted slums of indigent Paris" and that if she doesn't find him soon he risks becoming a criminal or a drink-sodden reprobate at best.

A Question of Passports

Citizen Bibot of the Town Guard has command of the Porte Montmartre – the last commandant there, citizen Ferney, was guillotined for having allowed a whole batch of aristos to escape and find safety outside the walls of Paris. Citizen Marat arrives to warn Bibot to be watchful because the Pimpernel has promised to rescue the Duc and Duchesse de Montreux and their family, (who are on their way to the Conciergerie prison) that very evening, but Bibot is determined that the Scarlet Pimpernel will not get one over on him.

Being the desposition of citizeness Fanny Roussell, who was brought up together with her husband, before the Tribunal of the Revolution on a charge of Treason – both being subsequently acquitted.

Nobody in the quartier could quite recollect when it was that citizen Lepine, the new public letter-writer first set up in business at the angle formed by the Quai des Augustins and the Rue Dauphine; but he certainly was there on the 28th day of February 1793, when Agnes, with eyes swollen with tears, a market basket on her arm and a look of dreary despair on her young face, turned that self same angle on her way to the Pont Neuf, and nearly fell over the rickety construction which sheltered him and his stock.

Baroness Emma Magdolna Rozália Mária Jozefa Borbála "Emmuska" Orczy de Orci (23 September 1865 – 12 November 1947), pen name as Baroness Orczy, was a Hungarian-born British novelist, playwright, and artist of noble origin. She is most known for her series of novels featuring the Scarlet Pimpernel, the alter ego of Sir Percy Blakeney, a wealthy English fop who transforms into a formidable swordsman and a quick-thinking escape artist, representing the original "hero with a secret identity".

Opening in London's West End on 5 January 1905, The Scarlet Pimpernel became a favourite of British audiences. Some of her paintings were exhibited at the Royal Academy in London. During World War I, Orczy formed the Women of England's Active Service League, an unofficial organisation aimed at the recruitment of female volunteers for active service.