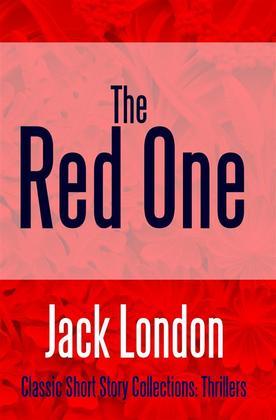 THE RED ONE (Excerpt)
There it was! The abrupt liberation of sound! As he timed it with his watch, Bassett likened it to the trump of an archangel. Walls of cities, he meditated, might well fall down before so vast and compelling a summons. For the thousandth time vainly he tried to analyse the tone-quality of that enormous peal that dominated the land far into the strong-holds of the surrounding tribes. The mountain gorge which was its source rang to the rising tide of it until it brimmed over and flooded earth and sky and air. With the wantonness of a sick man's fancy, he likened it to the mighty cry of some Titan of the Elder World vexed with misery or wrath. Higher and higher it arose, challenging and demanding in such profounds of volume that it seemed intended for ears beyond the narrow confines of the solar system. There was in it, too, the clamour of protest in that there were no ears to hear and comprehend its utterance.

Such the sick man's fancy. Still he strove to analyse the sound. Sonorous as thunder was it, mellow as a golden bell, thin and sweet as a thrummed taut cord of silver—no; it was none of these, nor a blend of these. There were no words nor semblances in his vocabulary and experience with which to describe the totality of that sound.

Time passed. Minutes merged into quarters of hours, and quarters of hours into half-hours, and still the sound persisted, ever changing from its initial vocal impulse yet never receiving fresh impulse—fading, dimming, dying as enormously as it had sprung into being. It became a confusion of troubled mutterings and babblings and colossal whisperings. Slowly it withdrew, sob by sob, into whatever great bosom had birthed it, until it whimpered deadly whispers of wrath and as equally seductive whispers of delight, striving still to be heard, to convey some cosmic secret, some understanding of infinite import and value. It dwindled to a ghost of sound that had lost its menace and promise, and became a thing that pulsed on in the sick man's consciousness for minutes after it had ceased. When he could hear it no longer, Bassett glanced at his watch. An hour had elapsed ere that archangel's trump had subsided into tonal nothingness...