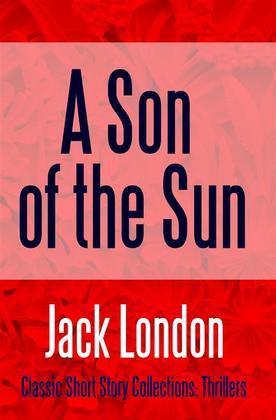 A Son of the Sun

A SON OF THE SUN (excerpt)
The Willi-Waw lay in the passage between the shore-reef and the outer-reef. From the latter came the low murmur of a lazy surf, but the sheltered stretch of water, not more than a hundred yards across to the white beach of pounded coral sand, was of glass-like smoothness. Narrow as was the passage, and anchored as she was in the shoalest place that gave room to swing, the Willi-Waw's chain rode up-and-down a clean hundred feet. Its course could be traced over the bottom of living coral. Like some monstrous snake, the rusty chain's slack wandered over the ocean floor, crossing and recrossing itself several times and fetching up finally at the idle anchor. Big rock-cod, dun and mottled, played warily in and out of the coral. Other fish, grotesque of form and colour, were brazenly indifferent, even when a big fish-shark drifted sluggishly along and sent the rock-cod scuttling for their favourite crevices.

On deck, for'ard, a dozen blacks pottered clumsily at scraping the teak rail. They were as inexpert at their work as so many monkeys. In fact they looked very much like monkeys of some enlarged and prehistoric type. Their eyes had in them the querulous plaintiveness of the monkey, their faces were even less symmetrical than the monkey's, and, hairless of body, they were far more ungarmented than any monkey, for clothes they had none. Decorated they were as no monkey ever was. In holes in their ears they carried short clay pipes, rings of turtle shell, huge plugs of wood, rusty wire nails, and empty rifle cartridges. The calibre of a Winchester rifle was the smallest hole an ear bore; some of the largest holes were inches in diameter, and any single ear averaged from three to half a dozen holes. Spikes and bodkins of polished bone or petrified shell were thrust through their noses...