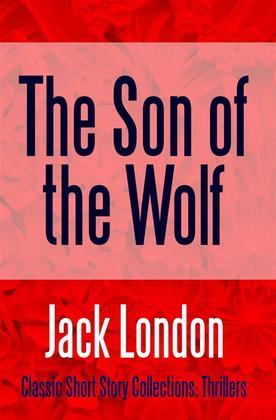 The Son of the Wolf

Jack London gained his first and most lasting fame as the author of tales of the Klondike gold rush. This, his first collection of stories, draws on his experience in the Yukon. The stories tell of gambles won and lost, of endurance and sacrifice, and often turn on the qualities of exceptional women and on the relations between the white adventurers and the native tribes.

The Son of the Wolf (excerpt)
Man rarely places a proper valuation upon his womankind, at least not until deprived of them. He has no conception of the subtle atmosphere exhaled by the sex feminine, so long as he bathes in it; but let it be withdrawn, and an ever-growing void begins to manifest itself in his existence, and he becomes hungry, in a vague sort of way, for a something so indefinite that he cannot characterize it. If his comrades have no more experience than himself, they will shake their heads dubiously and dose him with strong physic. But the hunger will continue and become stronger; he will lose interest in the things of his everyday life and wax morbid; and one day, when the emptiness has become unbearable, a revelation will dawn upon him.

In the Yukon country, when this comes to pass, the man usually provisions a poling boat, if it is summer, and if winter, harnesses his dogs, and heads for the Southland. A few months later, supposing him to be possessed of a faith in the country, he returns with a wife to share with him in that faith, and incidentally in his hardships. This but serves to show the innate selfishness of man. It also brings us to the trouble of 'Scruff' Mackenzie, which occurred in the old days, before the country was stampeded and staked by a tidal-wave of the che-cha-quas, and when the Klondike's only claim to notice was its salmon fisheries.

'Scruff' Mackenzie bore the earmarks of a frontier birth and a frontier life.

His face was stamped with twenty-five years of incessant struggle with Nature in her wildest moods,--the last two, the wildest and hardest of all, having been spent in groping for the gold which lies in the shadow of the Arctic Circle. When the yearning sickness came upon him, he was not surprised, for he was a practical man and had seen other men thus stricken. But he showed no sign of his malady, save that he worked harder. All summer he fought mosquitoes and washed the sure-thing bars of the Stuart River for a double grubstake. Then he floated a raft of houselogs down the Yukon to Forty Mile, and put together as comfortable a cabin as any the camp could boast of. In fact, it showed such cozy promise that many men elected to be his partner and to come and live with him. But he crushed their aspirations with rough speech, peculiar for its strength and brevity, and bought a double supply of grub from the trading-post...