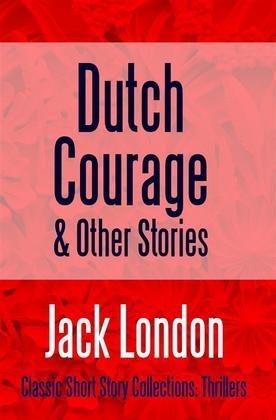 Dutch Courage and Other Stories

A collection of very early stories published posthumously, with a preface by his wife Charmian.

Gus Lafee finished wiping his hands and sullenly threw the towel upon the rocks. His attitude was one of deep dejection. The light seemed gone out of the day and the glory from the golden sun. Even the keen mountain air was devoid of relish, and the early morning no longer yielded its customary zest.

"Just our luck!" Gus repeated, this time avowedly for the edification of another young fellow who was busily engaged in sousing his head in the water of the lake.

"What are you grumbling about, anyway?" Hazard Van Dorn lifted a soap-rimmed face questioningly. His eyes were shut. "What's our luck?"

"Look there!" Gus threw a moody glance skyward. "Some duffer's got ahead of us. We've been scooped, that's all!"

Hazard opened his eyes, and caught a fleeting glimpse of a white flag waving arrogantly on the edge of a wall of rock nearly a mile above his head. Then his eyes closed with a snap, and his face wrinkled spasmodically. Gus threw him the towel, and uncommiseratingly watched him wipe out the offending soap. He felt too blue himself to take stock in trivialities.

"Does it hurt—much?" Gus queried, coldly, without interest, as if it were no more than his duty to ask after the welfare of his comrade.

"I guess it does," responded the suffering one.

"Soap's pretty strong, eh?—Noticed it myself."

"'Tisn't the soap. It's—it's that!" He opened his reddened eyes and pointed toward the innocent white little flag. "That's what hurts."...