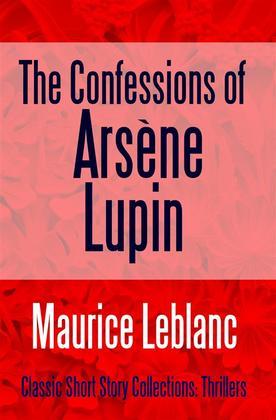 The Confessions of Arsène Lupin

This collection of Lupin short stories presents more puzzling criminal involvements of the classic French hero-thief and his men.

The character of Lupin might have been based by Leblanc on French anarchist Marius Jacob, whose trial made headlines in March 1905; it is also possible that Leblanc had also read Octave Mirbeau's Les 21 jours d'un neurasthénique (1901), which features a gentleman thief named Arthur Lebeau, and seen Mirbeau's comedy Scrupules (1902), whose main character is a gentleman thief. It was not influenced by E. W. Hornung's gentleman thief, A.J. Raffles, created in 1899, whom Leblanc had not read.

TWO HUNDRED THOUSAND FRANCS REWARD! (Excerpt)
"Lupin," I said, "tell me something about yourself."

"Why, what would you have me tell you? Everybody knows my life!" replied Lupin, who lay drowsing on the sofa in my study.

"Nobody knows it!" I protested. "People know from your letters in the newspapers that you were mixed up in this case, that you started that case. But the part which you played in it all, the plain facts of the story, the upshot of the mystery: these are things of which they know nothing."

"Pooh! A heap of uninteresting twaddle!"

"What! Your present of fifty thousand francs to Nicolas Dugrival's wife! Do you call that uninteresting? And what about the way in which you solved the puzzle of the three pictures?"

"Yes, that was a queer puzzle, certainly. I can suggest a title for you if you like: what do you say to The Sign of the Shadow?"

"And your successes in society and with the fair sex?" I continued. "The dashing Arsène's love-affairs!… And the clue to your good actions? Those chapters in your life to which you have so often alluded under the names of The Wedding-ring, Shadowed by Death, and so on!… Why delay these confidences and confessions, my dear Lupin?… Come, do what I ask you!… "

It was at the time when Lupin, though already famous, had not yet fought his biggest battles; the time that preceded the great adventures of The Hollow Needle and 813. He had not yet dreamt of annexing the accumulated treasures of the French Royal House nor of changing the map of Europe under the Kaiser's nose: he contented himself with milder surprises and humbler profits, making his daily effort, doing evil from day to day and doing a little good as well, naturally and for the love of the thing, like a whimsical and compassionate Don Quixote.

He was silent; and I insisted:

To my astonishment, he replied:

The first Arsène Lupin story appeared in a series of short stories serialized in the magazine Je Sais Tout, starting in No. 6, dated 15 July 1905. Clearly created at editorial request under the influence of, and in reaction to, the wildly successful Sherlock Holmes stories, the roguish and glamorous Lupin was a surprise success and Leblanc's fame and fortune beckoned. In total, Leblanc went on to write twenty-one Lupin novels or collections of short stories.

By 1907 Leblanc had graduated to writing full-length Lupin novels, and the reviews and sales were so good that Leblanc effectively dedicated the rest of his career to working on the Lupin stories. Like Conan Doyle, who often appeared embarrassed or hindered by the success of Sherlock Holmes and seemed to regard his success in the field of crime fiction as a detraction from his more "respectable" literary ambitions, Leblanc also appeared to have resented Lupin's success. Several times, he tried to create other characters, such as private eye Jim Barnett, but eventually merged them with Lupin. He continued to pen Lupin tales well into the 1930s.