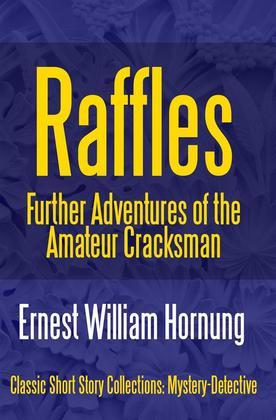 These "Further Adventures" is a collection of stories about the ever-popular amateur thief Raffles, following the success of "The Amateur Cracksman."

Arthur J. Raffles is a character created in the 1890s by E. W. Hornung, brother-in-law to Sir Arthur Conan Doyle, the creator of Sherlock Holmes. Raffles is, in many ways, a deliberate inversion of Holmes – he is a "gentleman thief", living at the Albany, a prestigious address in London, playing cricket for the Gentlemen of England and supporting himself by carrying out ingenious burglaries. He is called the "Amateur Cracksman", and often, at first, differentiates between himself and the "professors" – professional criminals from the lower classes.

As Holmes has Dr. Watson to chronicle his adventures, Raffles has Harry "Bunny" Manders – a former schoolmate saved from disgrace and suicide by Raffles, whom Raffles persuaded to accompany him on a burglary. While Raffles often takes advantage of Manders' relative innocence, and sometimes treats him with a certain amount of contempt, he knows that Manders' bravery and loyalty are to be relied on utterly. In several stories, Manders saves the day for the two of them after Raffles gets into situations he cannot get out of on his own.

One of the things that Raffles has in common with Holmes is a mastery of disguise – during his days as an ostensible man-about-town, he maintains a studio apartment in another name in which he keeps the components of various disguises. He can imitate the regional speech of many parts of Britain flawlessly, and is fluent in Italian.

I am still uncertain which surprised me more, the telegram calling my attention to the advertisement, or the advertisement itself. The telegram is before me as I write. It would appear to have been handed in at Vere Street at eight o'clock in the morning of May 11, 1897, and received before half-past at Holloway B.O. And in that drab region it duly found me, unwashen but at work before the day grew hot and my attic insupportable.

I transcribe the thing as I see it before me, all in one breath that took away mine; but I leave out the initials at the end, which completed the surprise. They stood very obviously for the knighted specialist whose consulting-room is within a cab-whistle of Vere Street, and who once called me kinsman for his sins. More recently he had called me other names. I was a disgrace, qualified by an adjective which seemed to me another. I had made my bed, and I could go and lie and die in it. If I ever again had the insolence to show my nose in that house, I should go out quicker than I came in. All this, and more, my least distant relative could tell a poor devil to his face; could ring for his man, and give him his brutal instructions on the spot; and then relent to the tune of this telegram! I have no phrase for my amazement. I literally could not believe my eyes. Yet their evidence was more and more conclusive: a very epistle could not have been more characteristic of its sender. Meanly elliptical, ludicrously precise, saving half-pence at the expense of sense, yet paying like a man for "Mr." Maturin, that was my distinguished relative from his bald patch to his corns. Nor was all the rest unlike him, upon second thoughts. He had a reputation for charity; he was going to live up to it after all. Either that, or it was the sudden impulse of which the most calculating are capable at times; the morning papers with the early cup of tea, this advertisement seen by chance, and the rest upon the spur of a guilty conscience...

Ernest William Hornung (7 June 1866 – 22 March 1921) was an English author and poet known for writing the A. J. Raffles series of stories about a gentleman thief in late 19th-century London. Hornung was educated at Uppingham School; as a result of poor health he left the school in December 1883 to travel to Sydney, where he stayed for two years. He drew on his Australian experiences as a background when he began writing, initially short stories and later novels.

In 1898 he wrote "In the Chains of Crime", which introduced Raffles and his sidekick, Bunny Manders; the characters were based partly on his friends Oscar Wilde and his lover, Lord Alfred Douglas, and also on the characters of Sherlock Holmes and Dr. Watson, created by his brother-in-law, Arthur Conan Doyle. The series of Raffles short stories were collected for sale in book form in 1899, and two further books of Raffles short stories followed, as well as a poorly received novel. Aside from his Raffles stories, Hornung was a prodigious writer of fiction, publishing numerous books from 1890, with A Bride from the Bush to his 1914 novel The Crime Doctor.

The First World War brought an end to Hornung's fictional output. His son, Oscar, was killed at the Second Battle of Ypres in July 1915. Hornung joined the YMCA, initially in England, then in France, where he helped run a canteen and library. He published two collections of poetry during the war, and then, afterwards, one further volume of verse and an account of his time spent in France, Notes of a Camp-Follower on the Western Front. Hornung's fragile constitution was further weakened by the stress of his war work. To aid his recuperation, he and his wife visited the south of France in 1921. He fell ill from influenza on the journey, and died on 22 March 1921, aged 54.

Although much of Hornung's work has fallen into obscurity, his Raffles stories continued to be popular, and have formed numerous film and television adaptations. Hornung's stories dealt with a wider range of themes than crime: he examined scientific and medical developments, guilt, class and the unequal role played by women in society. Two threads that run through a sizeable proportion of his books are Australia and cricket; the latter was also a lifelong passion.