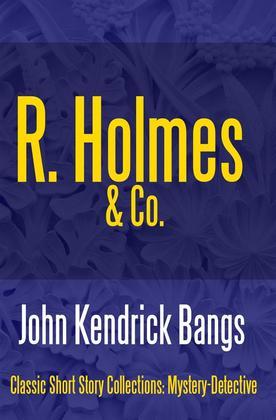 What would happen if master detective Sherlock Holmes sired a son with the daughter of one of his archenemies? That's the supposition at the center of R. Holmes & Co., which pits criminal mastermind Raffles against Holmes and goes on to tell the story of how Holmes fell for Raffles' daughter Marjorie, with whom he later had a child, the Raffles Holmes of the book's title.

R. Holmes & Co.: Being the Remarkable Adventures of Raffles Holmes, Esq., Detective and Amateur Cracksman by Birth (1906) is a short story collections as sequel to the Raffles books by E.W. Hornung.

This is a collection of 10 short stories about the son of Sherlock Holmes and grandson of Raffles.

INTRODUCING MR. RAFFLES HOLMES (excerpt)
It was a blistering night in August. All day long the mercury in the thermometer had been flirting with the figures at the top of the tube, and the promised shower at night which a mendacious Weather Bureau had been prophesying as a slight mitigation of our sufferings was conspicuous wholly by its absence. I had but one comfort in the sweltering hours of the day, afternoon and evening, and that was that my family were away in the mountains, and there was no law against my sitting around all day clad only in my pajamas, and otherwise concealed from possibly intruding eyes by the wreaths of smoke that I extracted from the nineteen or twenty cigars which, when there is no protesting eye to suggest otherwise, form my daily allowance. I had tried every method known to the resourceful flat-dweller of modern times to get cool and to stay so, but alas, it was impossible. Even the radiators, which all winter long had never once given forth a spark of heat, now hissed to the touch of my moistened finger. Enough cooling drinks to float an ocean greyhound had passed into my inner man, with no other result than to make me perspire more profusely than ever, and in so far as sensations went, to make me feel hotter than before. Finally, as a last resource, along about midnight, its gridiron floor having had a chance to lose some of its stored-up warmth, I climbed out upon the fire-escape at the rear of the Richmere, hitched my hammock from one of the railings thereof to the leader running from the roof to the area, and swung myself therein some eighty feet above the concealed pavement of our backyard— so called, perhaps, because of its dimensions which were just about that square. It was a little improvement, though nothing to brag of. What fitful zéphyrs there might be, caused no doubt by the rapid passage to and fro on the roof above and fence-tops below of vagrant felines on Cupid’s contentious battles bent, to the disturbance of the still air, soughed softly through the meshes of my hammock and gave some measure of relief, grateful enough for which I ceased the perfervid language I had been using practically since sunrise, and dozed off. And then there entered upon the scene that marvelous man, Raffles Holmes, of whose exploits it is the purpose of these papers to tell...

He was born in Yonkers, New York. His father Francis Nehemiah Bangs was a lawyer in New York City, as was his brother, Francis S. Bangs.

He went to Columbia College from 1880 to 1883 where he became editor of Columbia's literary magazine, Acta Columbia, and contributed short anonymous pieces to humor magazines. After graduation in 1883 with a Bachelor of Philosophy degree in Political Science, Bangs entered Columbia Law School but left in 1884 to become Associate Editor of Life under Edward S. Martin. Bangs contributed many articles and poems to the magazine between 1884 and 1888. During this period, Bangs published his first books.

In 1888 Bangs left Life to work at Harper's Magazine, Harper's Bazaar and Harper's Young People, though he continued to contribute to Life. From 1889 to 1900 he held the title of Editor of the Departments of Humor for all three Harper's magazines and from 1899 to 1901 served as active editor of Harper's Weekly. Bangs also served for a short time (January–June 1889) as the first editor of Munsey's Magazine and became editor of the American edition of the Harper-owned Literature from January to November 1899. (Wikipedia)