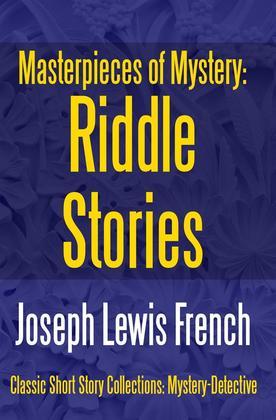 Edited by Joseph Lewis French, this collection of 9 riddle stories includes "The Mysterious Card" and its sequel by Cleveland Moffett, "The Oblong Box" by Poe, "A Terribly Strange Bed" by Wilkie Collins, "The Lost Room" by Fitz-James O'Brien and others selected as masterful examples of the genre by the editor. He says in the forward:

"A distinguished American writer of fiction said to me lately: 'Did you ever think of the vital American way we live? We are always going after mental gymnastics.' Now the mystery story is mental gymnastics. ... The stories of this collection cover a wide range and are the choice of reading in several literatures."

THE MYSTERIOUS CARD (excerpt)
RICHARD Burwell, of New York, will never cease to regret that the French language was not made a part of his education.

On the second evening after Burwell arrived in Paris, feeling lonely without his wife and daughter, who were still visiting a friend in London, his mind naturally turned to the theatre. So, after consulting the daily amusement calendar, he decided to visit the Folies Bergère, which he had heard of as one of the notable sights. During an intermission he went into the beautiful garden, where gay crowds were strolling among the flowers, and lights, and fountains. He had just seated himself at a little three-legged table, with a view to enjoying the novel scene, when his attention was attracted by a lovely woman, gowned strikingly, though in perfect taste, who passed near him, leaning on the arm of a gentleman. The only thing that he noticed about this gentleman was that he wore eye-glasses.

Now Burwell had never posed as a captivator of the fair sex, and could scarcely credit his eyes when the lady left the side of her escort and, turning back as if she had forgotten something, passed close by him, and deftly placed a card on his table. The card bore some French words written in purple ink, but, not knowing that language, he was unable to make out their meaning. The lady paid no further heed to him, but, rejoining the gentleman with the eye-glasses, swept out of the place with the grace and dignity of a princess. Burwell remained staring at the card.

Needless to say, he thought no more of the performance or of the other attractions about him. Everything seemed flat and tawdry compared with the radiant vision that had appeared and disappeared so mysteriously. His one desire now was to discover the meaning of the words written on the card.

Calling a fiácre, he drove to the Hôtel Continental, where he was staying. Proceeding directly to the office and taking the manager aside, Burwell asked if he would be kind enough to translate a few words of French into English. There were no more than twenty words in all.

"Why, certainly," said the manager, with French politeness, and cast his eyes over the card. As he read, his face grew rigid with astonishment, and, looking at his questioner sharply, he exclaimed: "Where did you get this, monsieur?"

Burwell started to explain, but was interrupted by: "That will do, that will do. You must leave the hotel."...

Joseph Lewis French (1858–1936) was a novelist, editor, poet and newspaper man. The New York Times noted in 1925 that he may be "the most industrious anthologist of his time." He is known for his popular themed collections, and published over twenty-five books between 1918 and his death in 1936. He founded two magazines, The New West (c. 1887) and The Wave (c. 1890). Afterwards he worked for newspapers "across the country" contributing poetry and articles. He struggled financially, and in 1927 the New York Graphic, a daily tabloid, published an autobiographical article they convinced him to write, entitled "I'm Starving – Yet I'm in Who's Who as the Author of 27 Famous Books."